Do you smell something funny??

It was early 2012 when my sister nominated me for a contest on the radio. 102.3 Now Radio in Edmonton put on a contest where if you nominated somebody and you won, would you give them half of the money. It was inspired by their host Adam McKale. He had previously won the 50/50 at the Hockey game and it was a huge amount. Something like $80K and since he had a agreement with his friend that if they won the would split, he in turn honored this agreement. So this was the contest, would you nominate someone in hopes they would do the same and splits with you.

My sister nominated me, they picked random names and put them on a wheel, the wheel was spun and my name was it. I won...

Of course with my sister nominating me, I did split half with her. It was exciting, I never won anything so big in my life.

What we decided to do with some of the money was take a trip. A trip we would not normally take because of the cost. Since we both love the cold we decided to take a trip back up to Whitehorse. We had previously gone on this trip with Northern Tales Travel Services. We decided to go again and this time we would go up to a secluded cabin and a snowmobile also another Aurora Borealis tour. It was exciting. I always dreamed about being in a cabin, in the winter, alone and just the fire. 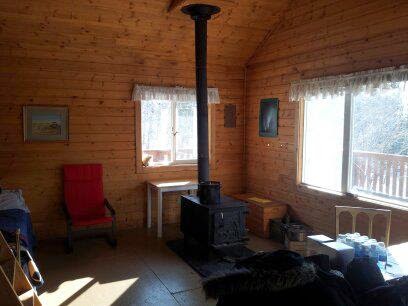 We got to the cabin and it was perfect. A cabin with a bedroom, kitchen, a loft and a livingroom with a wood burning stove to keep it warm. It was lovely. 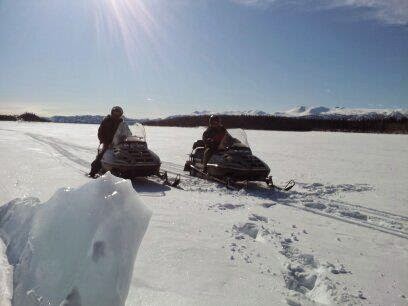 The day we got there we went on a snowmobile tour around the lake and stopped and had lunch on the side of the lake by campfire. 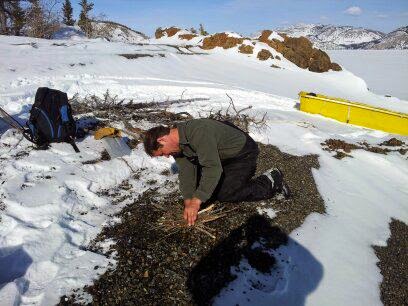 It was gorgeous. I had never seen such beautiful ice and on some parts of the lake there was clear frozen water you could see right to the bottom. 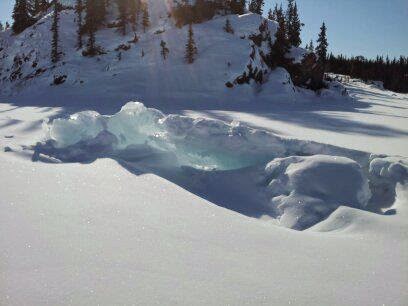 It was the best time! Worth every penny. 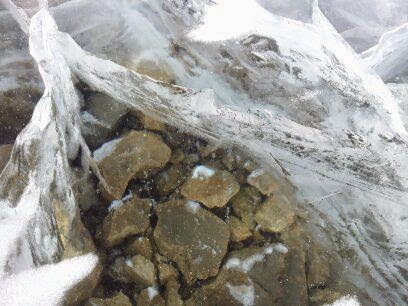 Back at the cabin we walked in and I thought, huh, smells kinda propaney in here. Neither of us knowing any different figured it was from all the propane lamps running in the cabin for the light. We made dinner that night, walked down to the lake, and in our super winter outfits layed on the lake looking at the stars. In complete silence, completely alone. It was something I will always remember. It was perfect.

We went to sleep that night and in the morning when I awoke I felt awful. I woke first and the fire had gone out in the wood stove. I tried but could not get it going. I felt terrible. Almost flu like and hungover. Hungover really really bad. But we hadnt drank a single thing. I went to talk to my husband and tell him how awful I felt. He said he felt the same so he was going to stay in bed. I decided, I would walk down to the shower house and take a shower. After the shower I felt a minuscule bit better. I was in the fresh air and I had just taken a shower. I was going to go back up to the cabin and go back to sleep as my husband was doing.

There were 3 cabins on the property. Ours, the main cabin which housed a whole lot of people if need be and a tiny little cabin. I met one of the men running the area when I went down to have a shower. I explained that I could not get the fire going and he said he would come help me. We walked back up to the cabin and the second he opened the door he commented on the smell. The heavy smell of propane. I explained to him that we both felt extremely extremely ill and at that point it finally dawned on me and on him as well that we had carbon monoxide poisoning. We immediately gathered our belongings and headed outside. We were  transferred to the smaller cabin. Upon further inspection the gas fridge had some fault to it and wasnt burning clean and we inhaled that ALL night. I can not begin to tell you how sick we felt.

There was no offer of taking us for medical attention. It seemed nobody was really prepared for such an incident and there is no way I knew what to do. We were at least an hour or more from Whitehorse, there was no cell reception. . We slept, in this new cabin. I walked around in the fresh air a bit and we waited it out until we felt better. It took most of the day. The owner of the cabins offered us a free dog sled ride. We accepted of course but also knew it was kind of a omg these two were poisoned on my property, how do I make this better for them. I wont pretend the dog sled wasn't awesome. It was. It was friggen GREAT! 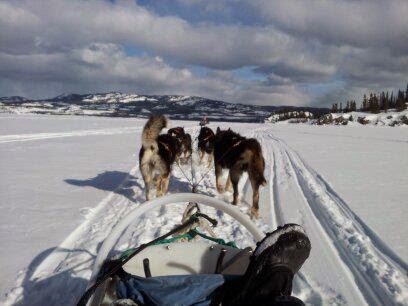 The next day we left and came back into Whitehorse to finish the rest of our trip.

When I got to the hotel in Whitehorse I sat and wrote Northern Tales an email. I described what had happened to us on our trip and how it was strange that the steps taken afterwards were so minimal that it was as if nobody was prepared for some sort of emergency. I sent my email of disappointment to the Travel Service and I would say within the hour I had a phone call from the owner. He was immensely apologetic for the incident and explained that this was a new feature they had added third party to their service. He advised us to go to the hospital, even though it was the next day. He also added that he was refunding our whole trip for us.

When I wrote the email I was not expecting such a response. I was at the least hoping to let them know of what kind of experience we had with this cabin trip.

We did go to the hospital there. The Dr's tested us and as we figured it was too long after for anything left in our systems. We explained our symptoms and he confirmed it was carbon monoxide poisoning. Great hey?

We spent the rest of our trip which was two more days in Whitehorse using Northern Tales to see the Aurora Borealis. They come get you at your hotel at 9pm and take you a half hour out of Whitehorse to a baron field with a small cabin on it. 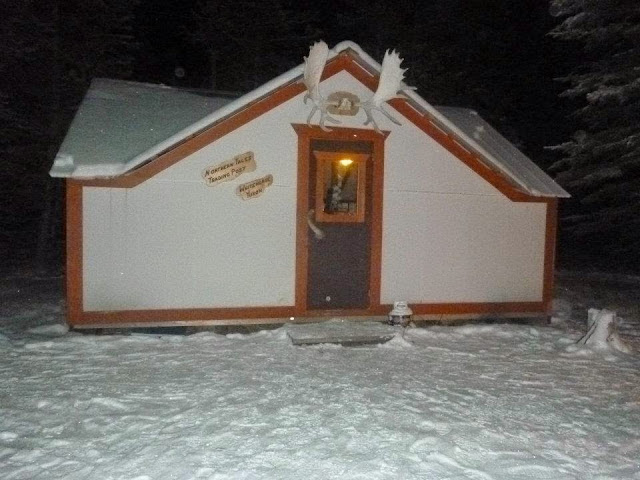 We spent many many hours in this cabin waiting for the northern lights to show. There are books, there are snacks, coffee, pop. They have a bonfire going outside the cabin and there are many other people to talk to. It is a wonderful time, but they stay out sometimes until 3am. It gets tiring.

But it is all worth it when someone lets you know that the northern lights are finally out. 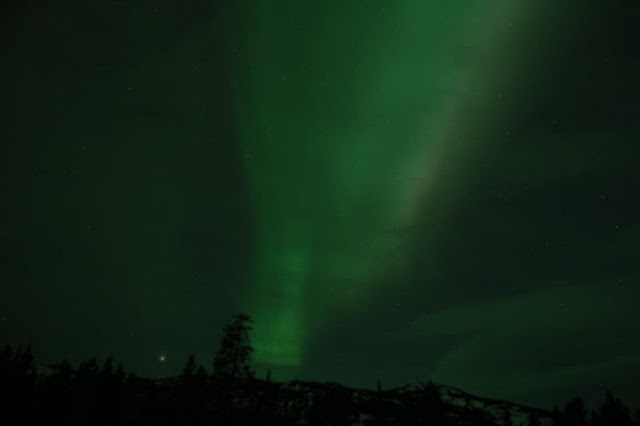 Would I come back to Whitehorse? In a heartbeat. Would I use Northern Tales Travel Service again? Absolutely no doubt and I would recommend them to anyone. Maybe not the cabin ;) 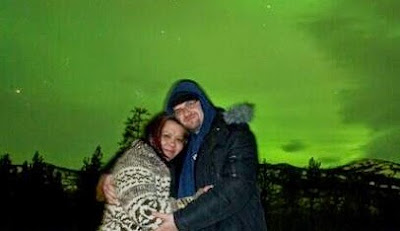 When we got back home, it was that night I found out I was pregnant with Ellie.
I am thankful we made it out ok, I am also thankful Ellie did too.

What are your crazy travel stories?